With the arrival of the Novel Coronavirus (COVID-19), Shared Interest is tackling the challenges facing the black emerging entrepreneurs and farmers with whom we work— as South Africa confronts its most difficult days since the abolition of apartheid. The country has reported nearly one of every five recorded COVID-19 cases on the continent. While the virus sickens fewer younger people, and one of every three South Africans is under the age of 30, other challenges loom large: 7.7 million people are now living with HIV/AIDS, and nearly one in five between the ages of 15 and 49 is HIV positive.

South Africa’s health is further undermined by the gross inequalities it inherited from colonial and apartheid times— exacerbated by the increasing disparities between rich and poor that characterize the global economy. As the world’s most unequal nation, its health is deeply compromised by its impoverished population’s living conditions in the township and informal settlements, where many people share toilets and taps, and physical distancing and self-isolation are not options. Moreover, where many informal food vendors are shut down, low income children can no longer depend on school meals, and the unemployed lose their incomes, hunger further saps communities’ strength to survive the virus.

This pandemic is raging against the backdrop of South Africa’s recession. With 29 percent of the population officially jobless before COVID-19, feeding families has become an immediate concern for millions of South Africans.

To make matters worse, Moody’s has just joined the other two major rating agencies by downgrading South Africa’s sovereign debt to “below investment grade.” This will raise the country’s cost of borrowing, reduce access to international credit, and further strain the nation’s budget as it stretches to cover its people’s basic needs.

Finance Minister Tito Mboweni reflected, “The opportunity we have today is to unite and work together to address our challenges. We as a people have overcome insurmountable challenges in the past and we can still overcome. We shall rise. We have to rise. We owe it to ourselves.”

Shared Interest small business partners are particularly vulnerable as they face uncertain supplies and customers and disrupted operations in a country that has been locked down, with borders closed, since late March. The country’s more than 260,000 registered small, medium and microenterprises are likely to be hit hardest by the lockdown—particularly retail, restaurants and tourism establishments. Many were facing challenges before the crisis.

Small businesses also suffer as larger businesses (from malls to manufacturers to mines) suspend operations, orders evaporate, invoices remain unpaid, and markets disappear. Moreover, left to their own, the country’s banks, like those in many other countries, would be likely to curtail their retail lending as they did in 2008 and 2009 during the last major economic crisis. With government encouragement, several banks, including one of Shared Interest’s major banking partners, ABSA, has promised some partial debt relief to small businesses. ABSA has promised a debt relief program for retail, including a three-month grace period for capital and interest payments, to address short term cash-flow issues. But not all lenders are implementing the same measures, or even share a common definition of “small businesses”—creating confusion and leaving already challenged entrepreneurs uncertain where to go, or slipping between the cracks.

Women entrepreneurs and employees are particularly stressed, as they have reduced access to markets and credit, confront the challenges of their families’ economic survival, and shoulder the mushrooming burden of increased domestic responsibilities as their families stay home.

Government Goes to the Mat

South Africa’s President, Cyril Ramaphosa, has moved quickly to reduce contagion, flatten the curve, and save lives. On March 27, as COVID-19 sufferers tested positive in South Africa, he declared a three-week lockdown (since extended), confining people to their homes; closing airports, schools, restaurants and bars; and strictly enforcing social distancing by prohibiting outside activities for anything more than meeting essential needs.

Within its strained financial resources, the government is implementing a far-reaching emergency and social protection program that includes:

Most notable, South Africa is launching a precedent-setting proactive preventative community tracing and testing campaign. The government is dispatching community health workers house to house to identify people with symptoms and refer them for tests and follow-up.

Shared Interest and our partner Thembani are focusing resources in South Africa on providing technical support to our guarantee beneficiaries. The challenges they face include distributing products imported from China, selling perishable goods to overseas markets, supplying larger businesses that are shut down for the foreseeable future, providing retail goods and services in cities, towns and rural communities in lockdown.

Support takes the form of individualized outreach by phone, email and WhatsApp to our guarantee beneficiaries to learn their current circumstances and challenges. Each client is engaged in a process to analyze the specific impact of the current pressures on the business, and to think through options and available resources— particularly where public information may be inadequate or confusing. We then explore both immediate needs and how to refocus business plans to enable clients to survive and start up again when the crisis subsides.

Borrowers are encouraged to present their lenders with their specific needs and proposals for managing their debt. We encourage banks to help them emerge from the crisis with their businesses intact.

Emotional support for emerging entrepreneurs is critical as they struggle to support their families and communities, and lay foundations for a more equitable economy than the one they have inherited.

“When we had little money, I did not have enough to feed my chicks,” lamented Mrs. Felizarda Joaquim, a recently retired member of United Methodist Women (UMW)Mozambique and participant in their “Força da Unidade: Deus e Connosco – Moamba Poultry Project,” with which Shared Interest has partnered over the past year. “At times I had to “improvise,” Felizarda noted, “and I could not afford to give the chicks what they needed because of the high cost of feed. Some customers complained that they were underweight. And sometimes, they died.” These challenges and losses affected her family’s income, as she is the sole breadwinner for two of her daughters, their three children and her husband who is ailing and no longer able to work.

Upon retirement, Felizarda used her meager state pension to purchase 100 chicks and launched her business. The first few months were very difficult. With mortality

rates near 30 percent, she was unable to generate enough profit to feed and grow her flock. The stress of losing chicks and the high cost of feed was multiplied exponentially by last year’s devastating cyclones Idai and Kenneth, which left Mozambique’s impoverished communities struggling to feed themselves.

In 2019, having learned to operate on a shoestring and gradually grow her business, she obtained additional capital from the government of Mozambique to buy additional chicks and equipment. She received further leadership training through UMW-New York and support for technical training in poultry-raising from Shared Interest. She was able to increase her production to 750 chickens every 45 to 60 days. Today, with her husband’s help, she produces 1,500 chickens every 12 weeks and sells them to market and street vendors.

In the process, she made enough money to renovate her chicken coops and add rooms to her own home to accommodate her family. She also uses the chicken manure to fertilize her vegetable garden and provide her family with a balanced diet. And as she expands her business further – she will use her training and technical support to feed her family and community, and share her skills with other women members during the next stages of the project. Today, Shared Interest is assisting her with connections to new buyers, such as three nearby butcher shops, and an abattoir that could process her chickens as part of larger commercial orders often requiring a minimum of 3,000 birds at a time. While these plans are on hold for the moment – given local COVID-19 social distancing and border closures – this remains a primary goal for her when the crisis lifts. And Felizarda will be ready.

Shared Interest has postponed its 26th Anniversary Awards Dinner Gala – Making HERstory: Celebrating the Power of Women in Southern Africa until Wednesday, September 9, 2020. This year’s event will honor Sophia Williams De Bruyn Co-leader of the 1956 South African Women’s March against apartheid and distinguished recipient of the Isitwalandwe/Seaparankoe award), and Felicia Mabuza Suttle (South African talk show host, activist and entrepreneur). It will be hosted by media personality Makho Ndlovu. At this time, we would like to encourage gala hosts, sponsors, ticket buyers and supporters to send your contributions by June 30th to help raise critical funds for our programs during these challenging times. For more up to date gala information, please visit sharedinterest.org/events.

In August of 2019, Shared Interest was selected by Dining for Women to be one of its “Featured Grantees” for 2020. Dining for Women, a global giving circle dedicated to eradicating poverty among women and girls in the developing world, is a natural partner for Shared Interest, which has always acknowledged the transformative power of capital in the hands of women. Dining for Women’s more than 400 chapters meet on a monthly basis to learn about that month’s featured grantee—the organization’s mission, the problem it hopes to solve, and how its work will affect the lives of women and girls. Over a meal, chapter members share camaraderie, conversation, and their financial resources, to strengthen the futures of women and girls around the world.

Shared Interest’s work was featured in February, specifically our project in Malawi with the Graça Machel Trust, supporting African Women in Agribusiness (AWAB). This organization of women entrepreneurs is building climate-resilient, affordable legume seed systems that are supplied by and cater to smallholder farmers, particularly women. As a featured grantee, Shared Interest provided Dining for Women with a short video, photographs and quotes, and cultural and historical information about Malawi. During the month of February, Executive Director Donna Katzin and Director of Strategic Partnerships Martha Brantley also traveled to chapter meetings in Pittsfield, MA, and Washington, D.C., respectively, to present to warm, welcoming and well-informed chapter

meetings there. Dining for Women is an impactful and amazing network.

Since its creation in 2003, Dining for Women has invested more than $6 million in grants and partnerships. As with AWAB in Malawi, the organization’s success is the direct result of harnessing women’s collective power: Dining for Women’s average donation is only $35, but its membership is large and dedicated, and it continues to grow. Shared Interest is proud to have been selected as a grantee partner of this dynamic organization, whose values deeply align with our own. Learn more about Dining for Women by visiting their website at diningforwomen.org. 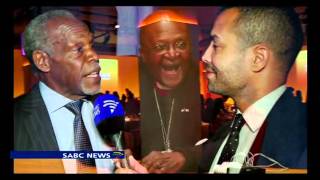